Monsanto is always trying to convince North Americans that Roundup Ready is safe and won’t create resistance, but in Australia, farmers sign on the dotted line to keep vigil over their use of the chemical.

“However, the ministry flagged the importance of farmers following procedures to avoid any threat of weedkiller resistance being spread to surrounding plants.

“Effective stewardship of Roundup Ready varieties is important in minimizing the risk of developing glyphosate-tolerant weeds,” a report of the crop trials said.
Monsanto imposes smallprint on buyers of its GM seed range that they inform neighboring farmers, permit official inspections and undertake “weed walks” after glyphosate sprays to see if resistance is spreading.”

Is this not a direct admission to a problem? Those of us who protest these chemicals already know of Roundup’s hazards, yet our governments go on blindly approving it.

Now Monsanto is putting the responsibility onto the farmer. “It’s your problem if something goes wrong” seems to be the statement here.

Why would any farmer WANT to take this on? Does this now open up the farmer to potential law suits from anyone?

Please continue to eat Organic as much and whenever you can.

Here is a GMO  variety heads up, courtesy of Maureen Bostock (a BC expat now based in  Ontario)

It seems Seedway Company out of Pennsylvania is selling BT Sweet Corn in  the U.S. & southwestern Ontario.

SASKATOON, SK: Grain company Viterra wants to force all farmers wishing
to grow flax in 2010 to purchase certified seed.  A Viterra spokesman
delivered that message in a presentation on January 11 at the Crop
Production Show in Saskatoon.

Viterra and others are pushing the requirement for certified seed as a
purported solution to the problem of the Triffid contamination in flax
shipments to Europe.  Triffid is a genetically modified variety not
approved in Europe.  But the NFU believes that the proposed certified
seed cure is the wrong one, and that there will be long-lasting and
negative side effects.
END_OF_DOCUMENT_TOKEN_TO_BE_REPLACED

Send your comments to the US Department of Agriculture by February 16,
2010.

Its not yet legal for Monsanto to sell its GM alfalfa seeds in Canada
but a US injunction on planting in that country could soon be
overturned. If GM alfalfa is planted in the US, it will quickly
contaminate our food system as well as Canadian alfalfa crops. It will
also lead to the legalization of GM alfalfa in Canada (Canada approved
Monsanto’s GM Roundup Ready alfalfa in 2005 but it still needs variety
registration as a last step before commercialization here).

The US Department of Agriculture (USDA) was court-ordered to conduct
an Environmental Impact Statement (EIS) on alfalfa and GM alfalfa
plantings were halted until this EIS was satisfactorily completed.
This draft EIS is now out for comment until February 16. Farmers and
their organizations in Canada are encouraged to send comments about
the expected impact of GM alfalfa contamination. Consumers are also
asked to express their concern.

Our strong action could stop GM alfalfa and result in an unprecedented
ruling about the real contamination risks of GM.

Please take one of these three actions.

2. Coordinate with us to write your substantial comments – Please also
send us your comments and cc them to the Minister of Agriculture and
Agriculture Critics from other Parties. Contact Lucy Sharratt, CBAN
Coordinator at 613 241 2267 ext.6 or coordinator@cban.ca

3. Sign your group to the “No to GMO Alfalfa” statement http://www.cban.ca/alfalfa

Tell the US Government That You Care About GE Contamination of Organic
Food!
In 2006, the Center for Food Safety (CFS) sued the Department of
Agriculture (USDA) for its illegal approval of Monsanto’s genetically
engineered (GE) Roundup Ready alfalfa.  The federal courts sided with
CFS and banned GE alfalfa until the USDA fully analyzed the impacts of
the plant on the environment, farmers, and the public in a rigorous
analysis known as an environmental impact statement (or EIS). USDA
released its draft EIS on December 14, 2009.  A 60-day comment period
is now open until February 16, 2010.  This is the first time the USDA
has done this type of analysis for any GE crop.  Therefore, the final
decision will have broad implications for all GE crops.

CFS has begun analyzing the EIS and it is clear that the USDA has not
taken the concerns of non-GE alfalfa farmers, organic dairies, or
consumers seriously.  USDA’s preliminary determination is to once
again deregulate GE alfalfa without any limitations or protections for
farmers or the environment. Instead USDA has completely dismissed the
fact that contamination will threaten export and domestic markets and
organic meat and dairy products.  And, incredibly, USDA is claiming
that there is no evidence that consumers care about such GE
contamination of organic!

USDA also claims that consumers will not reject GE contamination of
organic alfalfa if the contamination is unintentional or if the
transgenic material is not transmitted to the end milk or meat
product, despite the fact that more than 75% of consumers believe that
they are purchasing products without GE ingredients when they buy
organic.

USDA claims that Monsanto’s seed contracts require measures sufficient
to prevent genetic contamination, and that there is no evidence to the
contrary. But in the lawsuit requiring this document, the Court found
that contamination had already occurred in the fields of several
Western states with these same business-as-usual practices in place!

USDA predicts that the approval of GE alfalfa would damage family
farms and organic markets, yet doesn’t even consider any limitations
or protections against this scenario.  Small, family farmers are the
backbone and future of American agriculture and must be protected.
Organic agriculture provides many benefits to society: healthy foods
for consumers, economic opportunities for family farmers and urban and
rural communities, and a farming system that improves the quality of
the environment. However, the continued vitality of this sector is
imperiled by the complete absence of measures to protect organic
production systems from GE contamination and subsequent environmental,
consumer, and economic losses.

Tell USDA That You DO Care About GE Contamination of Organic Crops and
Food! http://ga3.org/campaign/alfalfaEIS

This alert was published by the Organic Agriculture Protection Fund of
the Saskatchewan Organic Directorate and the Canadian Biotechnology
Action Network. January 2010.

From Okanagan Greens.ca: these films should have you questioning a few things: 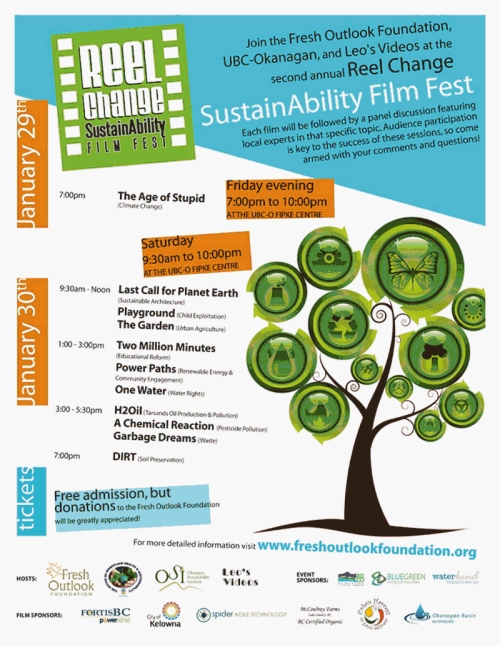 The Story Of Food – video at USC Canada

Here’s a link to a great little video about food. It’s loaded with information: quite ‘nutritional’.

The Story Of Food

Another video from Hellman’s: Eat Real. Eat Local. Facts in this video:

Most of your tomato’s, cuc’s and peppers are imported.

For every pear we grow, 700 are imported. For every apple we export, we import 5.

Ontario paved over 49% of its prime farmland to build the greater Toronto area.

Green light again for GM alfalfa in the USA

(21 January 2010) In the USA, the Department of Agriculture (USDA) intends to permit the cultivation of genetically modified (GM) alfalfa once more. This recommendation is based on a newly-completed environmental impact assessment. Year-long legal conflicts were antecedent.

The cultivation approval of herbicide-tolerant GM alfalfa issued in 2005 was revoked in 2007 after a Californian court ordered the thorough environmental impact assessment. Diverse environmental groups and consumer associations had filed suit against the approval. The plaintiffs accused the administration of insufficient investigation with regard to possible environmental damage, such as may occur through outcrossing with conventional plants or wild relatives as well as through the spread of resistant weeds.

By court ordinance, the cultivation of GM alfalfa was subject to strict constraints: for example, fields intended for planting required approval from the agricultural authority. Special obligations applied to the transport, storage and labeling of the harvest. Monsanto filed high-level suits against these constraints and negotiations are expected this year.